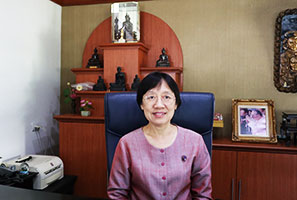 With a considerably long stint in the fisheries arena, Ms. Malinee started her career as Fishery Biologist at the Department of Fisheries (DOF) of Thailand in 1986. At DOF, she acquired vast experience in coastal fisheries research and development including aquaculture and post-harvest management. When Ms. Malinee was appointed as the Director of Fishery Foreign Affairs Division of DOF in 2011, she also served as the SEAFDEC National Coordinator for Thailand until 2015 when she was transferred to the Fishery Industrial Technology Research and Development Division as its Director. In 2017, Ms. Malinee was designated again as the Director of Fishery Foreign Affairs Division, and in 2019 she was promoted to the position of Inspector General of the DOF. Recently, Ms. Malinee was nominated by the Government of Thailand to serve as the Chief of the TD and concurrent Secretary-General of SEAFDEC for a period of two (2) years from 2 October 2019 to 30 September 2021, and given the task of leading the operations of SEAFDEC and in the implementation activities in line with the directives of the SEAFDEC Council. Ms. Malinee obtained her Bachelor of Science degree in Fisheries and Master of Science (Fisheries Science) from Kasetsart University, Thailand; and also Master of Science (Aquaculture) from Ghent University, Belgium. Throughout her career, Ms. Malinee had also enhanced her knowledge and experience in a wide range of subjects, e.g. coastal environment management, trade and food security, standards for fisheries and aquaculture products, through her participation in several international training courses and meetings.