SEAFDEC convenes a side event during the CITES CoP19

SEAFDEC convened the side event “Resource Utilization of Commercially-exploited Aquatic Species (CEAS) in Southeast Asia: Regional Cooperation to Support National Actions” on 18 November 2022 during the 19th Meeting of the Conference of the Parties (CoP19) to the Convention on International Trade in Endangered Species of Wild Fauna and Flora (CITES) which was held on 14–25 November 2022 in Panama City, Panama. With support from the Japanese Trust Fund, the side event was intended to share the experiences of SEAFDEC including regional initiatives and lessons learned in supporting the ASEAN-SEAFDEC Member Countries through the implementation of capacity-building programs on the identification of sharks and rays and conduct of the study on the market and trade of sharks including the major actors, market channels, practices, and utilization, to support sustainable development and management of shark and ray resources in the Southeast Asian region. Moreover, the common positions of the ASEAN-SEAFDEC Member Countries on the proposed listing of commercially-exploited aquatic species into the CITES Appendices at the CoP19 were also shared during the side event.

The side event was facilitated by the SEAFDEC Secretariat Senior Policy Officer, Ms. Pattaratjit Kaewnuratchadasorn. The panelists were the Senior Advisor to SEAFDEC and sharks expert, Dr. Ahmad bin Ali; Head of the Marine Resource Management Office, CITES and Conservation of Endangered Species Unit of the Department of Fisheries Sabah in Malaysia, Mr. Lawrance Kissol, Jr.; Director of the Conservation Division of the Fisheries Administration of Cambodia, Mr. Ouk Vibol; and expert from the Food and Agriculture Organization of the United Nations (FAO), Dr. Kim Friedman.

CITES is an international agreement between governments that ensure that international trade in specimens of wild animals and plants does not threaten the survival of the species. Every two years, CITES holds the Conference of the Parties (CoP) to discuss the amendments of the proposals. During the CoP19, the amendments of the 52 proposals for inclusion into Appendix I and II for animals and plants including commercially-exploited aquatic species were discussed. As a result, sharks, hammerhead sharks, guitarfishes, sea cucumbers, and ornamental fishes (e.g. Potamotrogonidae spp. and Hypancistrus zebra) were listed in Appendix II. 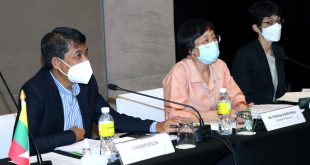 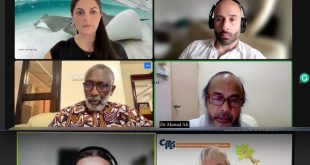