Dr. Kom, as he is fondly called, started working as Fisheries Biologist at the Department of Fisheries (DOF) of Thailand since 1981, where he obtained vast experiences in coastal fisheries research and development including the aquaculture of coastal aquatic species, and in environmental management. He served as Director of the Institute of Coastal Aquaculture of DOF during 2008-2010 after which he was promoted as Director of the DOF Planning Division in 2010, and subsequently as Director of the Coastal Fisheries Research and Development Division in 2012. In December 2015, Dr. Kom was nominated as the Secretary-General of SEAFDEC to lead the operation and implementation of SEAFDEC activities based on the directives of the SEAFDEC Council, for the period of 2 years from 30 November 2015 to 30 September 2017.

Dr. Kom obtained his Bachelor of Science (Fisheries Biology) degree from Kasetsart University (Thailand) in 1980; Master of Science in Technology of Environmental Management from Mahidol University (Thailand); and Ph.D. in Fisheries and Allied Aquaculture from Auburn University in Alabama (U.S.A.) in 2004. At Auburn University, Dr. Kom focused his studies on culture pond dynamics and aquaculture management. Dr. Kom attended several training courses on pond culture and management in various institutes and centers including SEAFDEC Aquaculture Department. He has also published a number of papers on aquaculture and environmental management in peer-reviewed scientific journals. 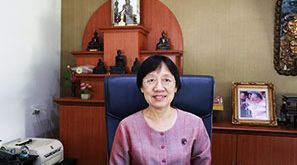