SEAFDEC organized the Department Chiefs’ Meeting on 2 December 2017 in Bangkok, Thailand. The Meeting was attended by SEAFDEC Department Chiefs and staff which discussed matters on the follow-up actions from the 49th Council Meeting, 40PCM, and 20FCG/ASSP, as well as the corresponding follow-up actions undertaken by the SEAFDEC Departments. During the meeting, Information-related Matters has informed that the repository system has been developed and it could be launched by the next Council Meeting. For the Resolution on the Future of SEAFDEC, the Meeting noted that the new framework of programs aligned with the new strategies under the Resolution would be applied and reported during the next Program Committee Meeting in 2018. 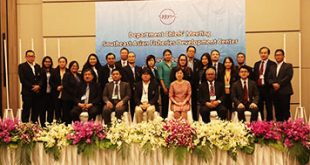