SEAFDEC with support from the SEAFDEC-Sweden Project convened the 1st Meeting of the Technical Working Group for Fisheries Management in Trans-boundary Areas between Cambodia and Lao PDR on 2-4 June 2014 in Siem Reap, Cambodia. Guided by the Memorandum of Understanding (MOU) between the Fisheries Administration of the Ministry of Agriculture, Forestry and Fisheries, Kingdom of Cambodia and the Department of Livestock and Fisheries of the Ministry of Agriculture and Forestry, Lao PDR signed in July 2010, as well as the draft MOA which was developed by representatives from these two countries in February 2014, the Meeting was mainly tasked to compile the recommendations that could be used to improve the provisions in the said draft MOA.

Thus, after initiating a review of the relevant legal frameworks of the two countries, and the issues and constraints that should be addressed under the collaboration, the Meeting came up with the final draft MOA and identified the preliminary activities to be carried out under the MOA. The Meeting agreed that the revised draft MOA would be finalized by fisheries-related authorities of both countries and signed by the Deputy Director-General of the Fisheries Administration of Cambodia and the Deputy Director-General of the Department of Livestock and Fisheries of Lao PDR. Moreover, the activities to be carried out until the end of 2014 were mapped out which could include: continue the review of laws and regulations, and policy statements; compile data on the past and current status of their respective fishery resources and habitats; and evaluate the livelihood patterns and livelihood options, including traditional norms/local knowledge in both countries. Furthermore, the Meeting also agreed that members for the “joint technical working group” from both countries should be appointed as soon as possible in order to facilitate the implementation of the joint activities and capacity building, and promote the sharing of relevant information and experiences. 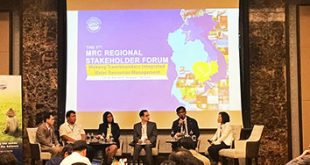