During the Opening Ceremonies of the International Conference on Inland Capture Fisheries organized in Palembang, Indonesia on 2 September 2014, the Government of Indonesia represented by Prof. Syarief Widjaja, Secretary-General of the Ministry of Marine Affairs and Fisheries (MMAF) and SEAFDEC Council Director for Indonesia, signed the National Legitimacy Document officially launching the establishment of the Inland Fishery Resources Development and Management Department (IFRDMD) as the fifth Department of SEAFDEC. Present during the signing ceremony were the representative of the Governor of South Sumatra, the Secretary-General of SEAFDEC, and delegates from the SEAFDEC Member Countries attending the International Conference.

Considering the importance of inland fisheries for food security, livelihood and well being of peoples not only in Indonesian but also in the whole Southeast Asian region, the intention of the Government of Indonesia in hosting a regional center for inland fisheries was expressed by its former Minister of Marine Affairs and Fisheries during the ASEAN-SEAFDEC Conference held in June 2011. The proposal was unanimously supported by the SEAFDEC Council of Directors in the subsequent year. The signing of the Legitimacy Document therefore gives due recognition to IFRDMD as an inter-governmental organization under the SEAFDEC framework and accordingly confirms the necessary privileges for IFRDMD. This development also gives the assurance that more focus of SEAFDEC activities would be given on inland fisheries, as well as on inland fishery resource conservation and management. After the signing ceremony and with Prof. Widjaja leading, the SEAFDEC Secretary-General, senior officials of SEAFDEC and delegates from the Member Countries, and the representative of the Governor of South Sumatra visited the construction site of the IFRDMD premises and facilities. Although it is expected that the new Department would only be operational by 2015, the activities of IFRDMD could start before the end of 2014 in order that regionally important and relevant issues could be addressed the soonest time possible. 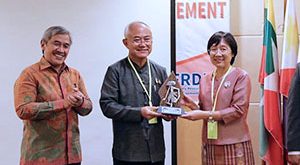 The Southeast Asian Fisheries Development Center (SEAFDEC) is an autonomous inter-governmental body, mandated to develop and support the management of fisheries in the Southeast Asian region by rational utilization of the region’s aquatic resources to provide food security to the people through a balanced approach to fisheries and habitat management. The mandate of the organization covers both marine and inland fisheries.

We are seeking for energetic and high caliber candidates to work with us as:

Proceedings of the End of Project Meeting: Fisheries and Habitat Management, Climate Change and Social Well- Being in Southeast Asia (2013-2019)
Download
7 downloads

Report of the Meeting on the Development of Monitoring, Control and Surveillance Network for Southern Andaman Sea
Download
3 downloads