The Seventeenth Meeting of the Information Staff Program of SEAFDEC Convened SEAFDEC organized the Seventeenth Meeting of the Information Staff Program (17 ISP) in Tangerang, Indonesia from 26 to 28 October 2016. Hosted by SEAFDEC/IFRDMD, the Meeting was attended by information officers and staff from the SEAFDEC Secretariat and Departments, to review the information strategy of SEAFDEC which is generally aimed at raising the visibility of SEAFDEC and strengthening communications among the SEAFDEC Departments and Secretariat.

During the Meeting, the progress made by the Secretariat and Departments in implementing the SEAFDEC Information Strategy were discussed and recommendations were raised for improvement. The Meeting also reviewed the new SEAFDEC institutional video for editing. A special agenda was added to announce the winners of the SEAFDEC logo contest which was opened to all SEAFDEC staff, to commemorate the 50th Anniversary of SEAFDEC in 2017. Thus, the Meeting served as forum for the SEAFDEC Secretary-General to award the corresponding prizes and certificates to the winners of the logo contest, namely: Ms. Suwanee Sayan (Secretariat) winning the first prize; Mr. Isidro Tendencia (AQD) the second prize, and Mr. Kamtorn Sukhondhasup (TD) the third, fourth and fifth prizes. The winners were chosen from all the submitted entries by the SEAFDEC Council of Directors during their 48th Meeting in April 2016.

The 17 ISP Meeting also initiated discussions on the events that would be organized for the celebration of the 50th Anniversary of SEAFDEC in 2017, as well as the production of the Coffee Table Book which would be launched in 2017. The recommendations of the 17 ISP Meeting on these aspects would be submitted for consideration during the forthcoming SEAFDEC Department Chiefs Meeting. Moreover, the Meeting also discussed the draft texts provided by the SEAFDEC Secretariat and Departments for the publication of the Southeast Asian State of Fisheries and Aquaculture (SEASOFIA) in 2017. Results of the discussion and required updates would be submitted for endorsement during the 39th Meeting of the SEAFDEC Program Committee in November 2016.

In conclusion, the 17 ISP Meeting agreed that inputs to the progress of implementation of the SEAFDEC Information Strategy should be updated to cover the whole year of 2016 and submitted to the Secretariat for compilation. Furthermore, based on the rotational arrangement to host the ISP meetings, it was agreed that the 18th ISP Meeting in 2017 would be hosted by SEAFDEC/MFRD in Singapore. 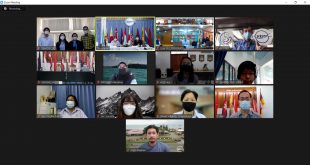 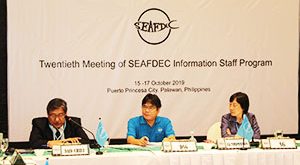